As a woman and a rationalist, I have found it hard to understand the plight of women who continue to believe in a personal God and a literalist Bible. Women Beyond Belief is a book of revelation: stories of social conditioning and personal self-doubt that have kept women ‘in their place’ historically and in our modern, supposedly educated world. Besides the sometimes wrenching accounts of eventual awakening, Karen Garst provides a very useful account of the Judeo-Christian tradition of subordinating women that should be read by any woman who still labours under the delusion of
a beneficial deity. 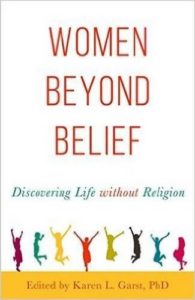 “Often these days, I can accept my own thoughts and feelings with curiosity and compassion. It’s astonishing to me that I can experience compassion that doesn’t require any judgment or warping of my being. Sometimes I even have bouts of wonder or joy, free from any dogma or deity, which also amazes me. I’ve discovered that as I am kinder to myself, I am kinder to other people (although I have a long way to go here…) I have friends who love me as I am—I am so grateful for them! If I want peace, I ponder the moon and listen to the tree frogs, or I run off to the beach and watch white foam flying off of green-glass waves. I still stare up at the stars, but there’s no prayer, only peace. These days, that’s enough. The dictionary defines integrity as “soundness,” “honesty,” and “the state of being whole, entire, undiminished, and unimpaired.” These are perfect words for how I am beginning to feel; it’s as though I am beginning to breathe again. I still have a life to make. But I am getting me back. All of me. Now that’s what I call a miracle.” Ann Wright.

Ann Wright was raised in a fundamentalist Christian sect. She is one of 22 authors who wrote an essay about her journey away from religion.

US-based author Karen Garst has compiled these essays into a book entitled Women Beyond Belief: Discovering Life without Religion. Garst became incensed by the 2014 Hobby Lobby ruling of the US Supreme Court, which excused craft store Hobby Lobby from following the dictates of the Affordable Care Act; they were allowed to continue failing to provide certain forms of birth control to their employees. “Will we never end the fight for women’s reproductive rights?” Garst said. Once again, religion had influenced American law; politicians continue to cite religion in supporting restrictions on abortion; funding is banned to Planned Parenthood; and there are still a host of other issues that are against women.

The first leaders of the New Atheism movement that arose after 9/11 were men: Richard Dawkins, Sam Harris, Christopher Hitchens, and Daniel Dennett. They came with backgrounds of science and philosophy. They launched a renewed effort to show people how destructive religion can be and how all Abrahamic religions are based upon an Iron Age mythology, borrowing from other mythologies of the time.

Dr Garst adds a focus on women and the role this mythology has played in the culture of many countries to denigrate and subordinate women. She states that ‘Religion is the last cultural barrier to gender equality.’ And she is right. More and more women atheists are speaking out. And as we all know, if women leave the churches, they will collapse.