Why Prayers in Parliament Should Stop 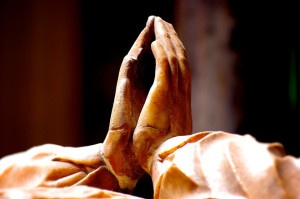 RECITING a Christian prayer before Parliament breaches the secular principle of separation between Church and State, offends the spirit of section 116 of the Australian constitution, and violates the principle of freedom of religion.

It is important to recall that the Speaker begins each sitting with two prayers. The first is a prayer for Parliament: ‘Almighty God, we humbly beseech Thee to vouchsafe Thy blessing upon this Parliament. Direct and prosper our deliberations to the advancement of Thy glory, and the true welfare of the people of Australia.’ The second is the Lord’s Prayer. Much the same happens in the Senate.

What’s wrong with beginning each parliamentary sitting with these prayers? First, such prayers clearly breach the secular principle that the state and religion should be kept separate. Virtually all liberal democracies recognise the importance of such separation in preserving the freedom of thought, conscience, and religion. Of course, there are many ways in which the state and religion may legitimately interact. The logistical support for the World Youth Day of Pope Benedict XVI is an example.[quote align=”center” color=”#999999″]But when the Parliament of Australia prays to God, it is the state itself at prayer, manifesting a commitment to religious belief and observance.[/quote]

But when the Parliament of Australia prays to God, it is not the state supporting a church’s public event — it is the state itself at prayer, manifesting a commitment to religious belief and observance.

The irony is that if Parliament enacted a law that required government departments or state schools to start their day with a similar prayer, it would soon be invalidated by the High Court. Section 116 of the Constitution expressly — and for good reason — forbids such laws. Though technically the parliamentary prayers do not breach section 116 (as they are under internal standing orders and not a ‘Commonwealth law’), they, nonetheless, offend the secular spirit of the section. If Parliament cannot impose prayers on anyone else in Australia, it should not impose them upon its own members.

This point relates to the freedom of religion of Members of Parliament. All members of the House of Representatives (and Senators too) are included in the prayers, regardless of their religious views. Non-Christian MPs, whether they follow another religion or no religion at all, are included among the ‘we’ who ‘beseech Almighty God’. Of course, many may not be troubled but the point is that any who are indeed troubled — and this group could include some Christian MPs — are, nonetheless, included in the prayers. This practice clearly violates the freedom of religion. Imagine if your workplace or school included you in a daily prayer against your wishes.[quote align=”center” color=”#999999″]The very recognisably Christian Lord’s Prayer does not represent the religiously plural country that Australia is and has long been.[/quote]

Finally, the very recognisably Christian Lord’s Prayer does not represent the religiously plural country that Australia is and has long been. But, then, no ceremony at the beginning of each sitting could feasibly represent all the religious views found in Australian society, and Parliament should not try to do so. Of course, one could argue that, so long as the majority of Australians identify as Christian (64% in the 2006 census) and want the existing prayers, then anyone not part of the supposed mainstream should just pipe down and accept that their Parliament is to represent the Christian majority only. But is such crude majoritarianism the best our democracy can do?

It is, no doubt, a historical fact that the Judaeo-Christian tradition is a significant influence on Australian political and ethical values. But there is no reason to think the beginning of each sitting is the appropriate occasion on which to recognise such a fact. And even if it were, praying to God is much more than recognising a historical fact; it manifests a religious commitment by Parliament.

If we think religious freedom is so important, shouldn’t we respect the religious freedom of those MPs who want to pray before taking their seat in Parliament? Indeed we should, but there is nothing to stop MPs praying outside the parliamentary chamber. However, the freedom of those MPs to pray does not at all entail the right to compulsorily induct other MPs into that prayer.

So what should replace the prayers? Nearly everyone would agree that some sort of short ceremony would be appropriate here, rather than immediately launching into parliamentary business.

As a first draft, then, and with all due modesty, we propose that, at the beginning of each sitting, the Speaker should read as follows:

‘All stand. We, the members of this House, humbly recognise the solemn responsibility placed upon us by the sovereign people of Australia to work together for the peace, order and good government of this Commonwealth, and we resolve to perform our duty with honour and integrity. I now ask all members to remain standing and, in silence, to pray or reflect on our responsibilities to the people of Australia.’

A minute’s silence should then be observed. An acknowledgment, at the beginning of each period of sittings, that the House is meeting on the lands of the traditional Aboriginal owners would also be appropriate.

This proposal adapts the language of the Australian Constitution and draws upon the ‘best practice’ of parliaments in the Westminster tradition. It respects freedom of religion, articulates fundamental and contemporary parliamentary values, and gives individual MPs the opportunity to reflect or pray on the important task that we have entrusted to them.