Controversy over special religious education or instruction in schools is boiling over again. Are kids getting the right kind of guidance? 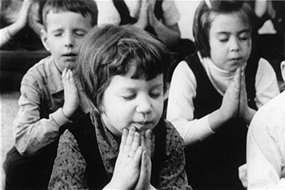 Tonight a discussion that has been simmering on and off around Australia for years and in recent months has boiled over again – special religious education in government schools.

For more than a century government schools have set aside one hour a week for religious bodies to come into schools and provide optional classroom instruction in their particular faith tradition to those who wish to attend. There has always been an opt-out provision for those with no religion, and in recent years NSW has provided the alternative of ethics classes.

In an increasingly secular world, some parents have taken issue with SRE/SRI, particularly content in some teaching materials that canvasses issues of relationships and sexuality. In NSW the Department of Education recently suspended some of the material used by its volunteer SRE teachers, supplied by various denominational and independent religious publishers.

There are also broader, longstanding questions about SRE/SRI. Who is doing the teaching? What are their qualifications and what is actually being taught? What oversight is there of classroom materials and syllabus?

At a time when understanding people of other faiths is more important than ever, what kind of religious education is the right fit for modern Australia?

GUESTS IN THIS HOUR