This semester’s planned religious instruction classes ask 10-year-old’s to act out a beheading.

This semester’s planned religious instruction classes ask 10-year-olds to act out a beheading.

Connect’s Upper Primary C1 teaching resource, which is widely used in Queensland, describes how Grade 5 and 6 children will act out the David and Goliath tale including its gruesome ending. 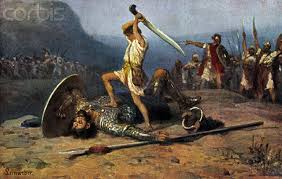 Connect’s Upper Primary C1 teaching resource is available from Christian Education Publications (CEP) on line, which recommends the C1 cycle for use in 2016.

For the David and Goliath role play, the teacher sets up the classroom as a battlefield, selects students to act out the parts and provides a script. The teacher narrates the background of the story, as Goliath of the Philistines mocks and curses David by his gods.

“Then Goliath moved towards David, but David ran at him, grabbed a stone from his bag, and slung it at him. It hit Goliath right in the forehead. And Goliath fell on his face on the ground.

Ask David and Goliath to act out the scene.

Then David took Goliath’s sword, killed him and cut off his head.

Ask David to act it out…You may need to verbally remind your students to be sensible. There are sure to be a few laughs as your student act out the scene, to keep students focused on the narrative.

When the Philistines saw that their champion was dead, they ran away. But the Israelites chased them and defeated them.

Ask the Philistines to head away and the Israelites to ‘chase’ them.”

The moral of the story is that “through Jesus, David’s descendant, God would save his people forever from their greatest enemies – sin, death and Satan”.

With Jesus on your side you can vanquish even the most frightening enemies.

Many would question the relevance of such a message today, and whether 10-year-old children benefit from acting out scenes of horrifying violence.

Connect’s syllabus uses a fundamentalist “sin and salvation” theme, which was developed by the evangelical Sydney Anglicans.

Children are sinners whose only hope of salvation is to accept the message of Jesus. They’re asked to compare themselves to dirty towels which requiring cleansing of sin.

“Who is a sinner here in this classroom?” the teacher is prompted to ask in Lesson 4 Lower Primary B1.

Many parents may find this content disturbing. But what is most worrying is how such inappropriate content finds its way into State School classrooms.

Surprisingly, there’s scant regulation of the curriculum. According to Godspace, another widely used teaching resource available in NSW and QLD, “the Government doesn’t approve the curriculum, the churches do”.

Further, most Queensland schools fail to provide parents with the requisite information on the content of classes. Parents are given vague motherhood statements such as this one, from Mountain Creek State School: “Jesus’s teachings provide a positive moral framework for living and making healthy positive choices”.

Alison Courtice, of Queensland Parents for Secular State Schools, has urged parents to ask their school principal if they genuinely think Connect’s material is appropriate for state school classrooms.

The Department of Education and Training (DET) have been informed of these materials, but as yet there are no plans to suspend classes, or to hold an inquiry into their suitability.