The Church and its weakening grip over Telstra and taxes

Whether it’s pressuring Telstra over same-sex marriage or receiving tax breaks, organised religion has enjoyed a fair amount of power. Polling suggests that could be about to change, writes Hugh Harris.

Source: The Church and its weakening grip over Telstra and taxes 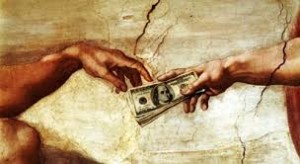 News that Telstra has apparently bowed to pressure from the Catholic Church and backed away from public support for marriage equality comes at a time many Australians are reconsidering the role of religion in our society.

Telstra and other corporations had lent their logos to a full page ad run by Marriage Equality Australia in May last year.

The Archdiocese of Sydney wrote to these corporations “with grave concern” about the marriage equality campaign, highlighting how the Catholic Church is “a significant user of goods and services from many corporations”.

Telstra quietly capitulated, saying it has “no further plans to figure prominently in the wider public debate”. According to the Australian, a “person familiar with the company’s decision” said Telstra did not want to “risk its commercial relationship with the church”.

Using its buying power to effectively threaten a boycott is a high handed and cynical move on the part of the Church. Perhaps this sort of behaviour helps us to understand why antipathy towards organised religion seems to be increasing in Australia.

According to a new poll by Ipsos, commissioned by the Rationalist Society, 64 per cent of Australians favour scrapping tax free status for churches and basic religious groups. Less than 20 per cent said tax breaks should remain, and 16.5 per cent were unsure.

The results provide a stunning correlation with last week’s Essential Report, where 64 per cent of those surveyed disapprove of the tax free status of religious groups. Significantly, 39 per cent “strongly disapprove”. Disapproval was consistent across all major parties, with the Liberal/National Party voters recording 63 per cent, and those aged 55 years and over at 73 per cent.

If antipathy to religion and its special treatment continues to grow, the pressure on governments to respond accordingly will eventually become irresistible.

Public opinion has undergone a seismic shift. Rather than ask why remove tax free status, Australians are now asking, “Why not?” The thought that only one in five Australians think advancing religion is beneficial to the public must be deeply troubling for religious advocates.

Given these results, the upcoming Census may reflect a tipping point in attitudes to religion in Australia. In the 2011 Census “no religion” recorded 22.3 per cent, up from 18.7 per cent in 2006, and 15.1 per cent in 2001. But if two thirds of Australians want to scrap the tax free status of religion, then the numbers of nonbelievers could well be much higher.

In this context the influence of the “religious right” in Australian politics appears disproportionate. Influential groups such as the Australian Christian Lobby (ACL), who are said to have remarkable influence over political leaders, ensure conservative Christian beliefs are never far from centre stage. But while their megaphone booms, public hostility increases. The inordinate amplification of fundamentalist Christian arguments doesn’t necessarily mean these views are widely held, or are influencing public opinion in the way intended.

It’s significant that other polls show a public embrace of some of the progressive causes that are trenchantly opposed by the Church, including marriage equality (supported by 64 per cent of Australians). In addition, 70 per cent support voluntary euthanasia and 80 per cent support a woman’s right to choose abortion, despite it still being technically illegal in QLD and NSW.

Given this, the assertions of raw political power, such as that seen by the Catholic Church and Telstra, could well backfire and fuel resentment against the favourable tax treatment of religion.

Research done for Senator David Leyonhjelm shows the government could save $350 million by getting rid of taxpayer support for religions organisations. Given our country’s revenue problem, one would have thought the solution obtains with considerable consequence.

It might be that public opinion is becoming polarised by the tone of recent debate surrounding issues such as same-sex marriage and the Safe Schools Program. But if antipathy to religion and its special treatment continues to grow, the pressure on governments to respond accordingly will eventually become irresistible. The disparity between pro-Christian government policies and secular public attitudes cannot be ignored forever.