Sacred to Secular: a new work on Australian secularism 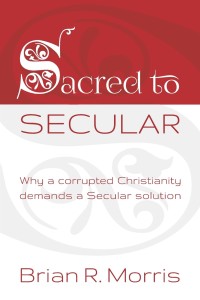 New books that drive home the need for secular change add welcome momentum to the rising groundswell of public discontent with religion — whether it’s the Islamic extremism of IS, or the Royal Commission examining child abuse.  This impetus for change is encapsulated in a new publication, ‘Sacred to Secular: why a corrupted Christianity demands a Secular solution.‘

And solutions there are, culminating with Chapter 9 that profiles the successful secular models of Scandinavia — a social structure that underpins an egalitarian, equitable and civilised culture devoid of religious authoritarianism.

The book is endorsed by credible commentators that include Hugh Mackay and Peter Boghossian, a speaker for the Richard Dawkins Foundation.  The text focuses initially on the excesses of Christianity — how it remains embedded in today’s society, and the harm it continues to inflict.  One chapter profiles the work of Professor Marion Maddox and the perversion of predatory evangelism in schools; another deals with the excesses of entrepreneurial Christianity.

The theme is contemporary.  There’s a chapter dealing with the latest neuro-scientific research into ‘faith’, and belief in the supernatural.  Dr Richard Carrier’s groundbreaking book, ‘On the Historicity of Jesus’, is another feature, and the chapter draws together the latest work of other secular historians that cement the reality of Christian history being riddled with pious fraud and blatant fabrication.

The narrative leads to an analysis of Scandinavian secularism — a realistic model to superseded a discredited “Christian tradition” — and the chapter concludes with 25 key secular issues that require immediate attention. There is a rational ‘call to action’ with practical ideas and suggestions which are based soundly on the author’s experience in media and public relations.  Overall, the book makes a solid contribution in the current climate of secular politics.

Title: Sacred to Secular: why a corrupted Christianity demands a Secular solution.

Author: Brian Morris of Plain Reason, a South Australian based organisation that questions the foundations of religion, the harm religion continues to inflict on children, and the covert methods by which religion undermines progress towards an inclusive, egalitarian and secular Australia.

Price: US$15.46 on Amazon, or A$25 from the author. (Note: proceeds from sales to be used to increase distribution)