Religious groups are not taxable. No wonder there’s no transparency in how their billions of dollars are spent.

Source: Religion’s tax break is a cross we shouldn’t have to bear 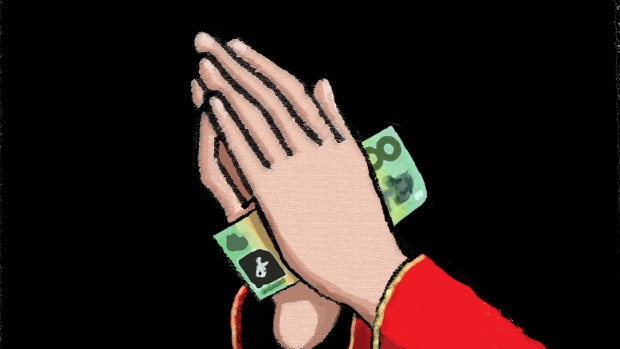 Whether or not you are a practising Christian, Easter is a time to think about religious traditions. The ongoing proceedings of the Royal Commission into Institutional Responses to Child Sexual Abuse​ and the cover-ups so long perpetrated within religious institutions are added reason to do so this year. So, too, is the trial at the Vatican of two investigative journalists for accessing secret Vatican documents about financial corruption and incompetence.

There’s a lot to reflect on here, for the religious and the non-religious alike. Right now, we are also embroiled in the politics of the forthcoming federal budget and no issue is more important or more entangled in obfuscation than that of tax reform. The confluence of these things is worth considering, because the tax-exempt status of religious organisations in this country is a much-neglected topic and one which ought finally to be seriously addressed.

Not being taxable, those billions are unaccounted for. If they were taxable, there would be a greater degree of transparency in how they were being used. If they were taxable, many billions of dollars in revenue might be available for dealing with services that are now keeping the budget in the red. At the very least, this suggests we should do a stocktake on the justification for religious organisations enjoying tax exemption.

A review of the tax privileges automatically enjoyed by religious organisations would no doubt be welcomed by the non-believer or even the believer uneasy about the ways in which some religious groups function in our society. But even a sincere believer would surely want to know that principles of equity and fairness are being applied across the board.

And Catholics in particular, given the recent revelations about corruption and incompetence in Vatican finances, should surely want to see greater transparency and accountability in the way their money is being spent by the church hierarchy.

For centuries now, British law has recognised certain activities as “charitable” and worthy of public support by way of relief from taxation. Four so-called “heads of charity” were recognised: the relief of poverty, the advancement of education, the advancement of religion, and “other purposes beneficial to the community”. Australia inherited these four heads of charity as part of the common law at Federation. But very recently, on January 1, 2014, something called the Charities Act introduced statutory definitions of “charity” and “charitable purpose”.

This act adopted the four historical heads of charity, but added others, including promoting reconciliation, advancing the natural environment, advancing health and preventing or relieving the suffering of animals. Not-for-profit organisations pursuing such activities, that can demonstrate that their purpose is “for the public benefit”, are accepted as charitable and exempt from certain taxes.

You may or may not have been aware of any of this, but consider that organisations that advance religion are not required to demonstrate the public benefit of their activities – the 2013 act assumes they are “charitable”.

This assumption is what calls for careful rethinking this Easter, considering what has been coming to light, even since 2014; and considering our stance as a secular society, i.e. one that tolerates religious beliefs, but is not supposed to endorse or promote them.

Is there anything in the definition of religion that makes it intrinsically charitable? Thirty years or so ago, the High Court advanced a definition of religion in Church of the New Faith v Commissioner of Payroll Tax (1983) that deserves careful attention. The Church of the New Faith (the Church of Scientology) had appealed against a ruling by a lower Victorian court that determined it was not a religion and therefore not entitled to the generous tax breaks afforded religious groups.

The Scientologists won and in the course of the case, the court set down the following definition of religion: “for the purposes of the law, the criteria of religion are twofold: first, belief in a supernatural Being, Thing or Principle; and second, the acceptance of canons of conduct in order to give effect to that belief”.

Neither of these criteria – belief in the supernatural and the acceptance of canons of conduct – necessarily implies or logically entails any charitable activity. Why, therefore, should the advancement of religion as such – Scientology being only an egregious case – be given tax exemption at all?

Suppose, instead, a revised Charities Act were to exclude the advancement of religion from automatic tax exemption and to require that to qualify for tax relief as charities, an organisation must demonstrate the public benefit of its activities (the law currently deems “prayerful intervention by closed or contemplative religious orders” to be of public benefit).

Further, a revised Charities Act should treat all charities the same by removing the current exemption for “basic religious charities” from any financial reporting. Would that not remove the scandal of dubious cults evading taxation, impose much needed transparency on religious organisations and better ensure that charities actually delivered services of practical utility, rather than siphoning off funds?

Who will champion such a reform? Who will shoulder aside or expose the many religious lobbies that would oppose this intrusion into their coffers? Taxpayers should. Those who seek authenticity in charities should. Those who are sceptical of religious doctrines should. And, not least, religious believers whose primary commitment is to integrity and accountability, not sectarian special pleading, should.

Dr Meredith Doig is president of the Rationalist Society of Australia and is standing as the lead Senate candidate for the Australian Sex Party in this year’s federal election.