The debate about section 18C of the Racial Discrimination Act finds its most troubling and sensitive reference point when it comes to Muslim objections to the criticism or mocking of Islam. 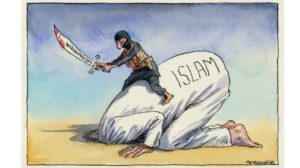 The debate about section 18C of the Racial Discrimination Act finds its most troubling and sensitive reference point when it comes to Muslim objections to the criticism or mocking of Islam.

Recently, British journalist and broadcaster Douglas Murray, author of the satirical pamphlet Islamophilia, blogged that far from being something that should be frowned on, mockery of Islam is a much-needed antidote to its excessive severity and overweening claims to be taken seriously. He has a point that merits, dare I say it, serious thought.

His remark was all the more notable because it was made in­ ­response to the assertion by ­Mohammed Shafiq that “our faith is not to be mocked”. Shafiq, who heads a body called the Ramadhan Foundation in Manchester, has spoken out against extremism and terrorism since 2001 and has been warned by police of Islamist death threats against him. So he is not what one would call a Muslim firebrand.

Murray responded to Shafiq that “there is nothing special about Islam that means it cannot be mocked. In fact, it would be a very good thing (both for Muslims and everyone else) if it were mocked rather more.” This claim ought to be the basis for intelligent discussion in the context of our prolonged and often rather precious discussion of “hate speech” and the famous 18C.

Having been raised as a conservative Catholic, I am well ­acquainted with religious objections to the mockery of the tenets of faith or of ritual practices. Yet, as a young man I was very struck by two aphorisms coined by ­Arthur Schopenhauer and Friedrich ­Nietzsche respectively, which suggested an attitude far closer to Murray’s than to that of the parish priests where I grew up.

“What a bad conscience religion must have,” wrote Schopenhauer, “is to be judged by the fact that it is forbidden under pain of such severe penalties to mock it.”

Half a century later, Nietzsche wrote: “Objection, evasion, happy distrust, pleasure in mockery are signs of health: everything unconditional belongs in pathology.”

One might disagree with Schopenhauer and Nietzsche about many things, but these are striking observations.

Murray is plainly offended by the excessive seriousness with which Islam takes itself and by the violent threats constantly being ­issued against those who mock ­either Prophet Mohammed or the Koran. Anyone interested in civil society, freedom of expression and the principles of toleration ought to reflect open-mindedly on his exchange with Shafiq.

Right now in the cinemas we can see Louis Theroux’s My Scientology Movie and this summer the musical comedy The Book of Mormon will be staged in a theatre near you.

The Scientologists are notoriously litigious, but there seems no danger that the cinemas screening Theroux’s film will be bombed, or that people coming out of them will be attacked. Mormons tend to be pretty earnest types and to take their absurd beliefs seriously, but there seems no likelihood that they will storm theatres when the musical is being performed or seek to assassinate its creators.

Why, asks Murray, should Islam be an exception in this regard? There are two reasons. From its inception, as spelled out in the Koran, Mohammed built into Islam execrations and dire threats against unbelievers, apostates and what he called “hypocrites”.

Those passages from the “holy book” of Islam are cited again and again to justify acts of violence against “blasphemers”, apostates and infidels all over the world.

This is both disturbing and unacceptable. But the second reason is, in some ways, even more disturbing. It is that a body of thought has grown up in the West to the ­effect that criticism of Islam, whether substantive scholarship or sceptical raillery, is “politically incorrect”, “inflammatory” or “neo-colonial” in character and should be avoided.

Under the aegis of this school of thought, “toleration” means ­acceptance of conservative and even militant Islam pretty much on its own terms.

This, of course, hamstrings civil society’s response to the influx of Muslims into the West and the problem of militant Islam on the global stage.

We need new and better ground rules for civilising Islam. The first such rule has to be that there can be no justification at all, whatever the Koran says, for violence or threats of violence against people for either criticism of Islam or mockery of it.

Toleration does not mean treating the religious beliefs or ideological positions of others as sacrosanct. It means respecting the humanity and civil rights of others, despite their often strange beliefs, and feeling perfectly free to differ with them and to josh them about those beliefs.

Now, mockery of the Murray kind presupposes something still hotly disputed: that the dogmatic claims of Islam are absurd and many of its conservative practices both objectionable and deserving of parody. Those things can be established only by discursive argument. Within the Muslim world, even such argument is largely forbidden. If we intend to win the war of ideas with a resurgent Islam, we must both engage in such ­argument and insist on our right to do so.

If we are to absorb large numbers of Muslims into Western societies, it cannot be as Wahhabis or Salafists. It has to be as initiates into the freedoms of a secular society, which include scholarship, theatre and journalism that will openly challenge Islam. As with other religions, large and small, those who wish to cling to old traditions and ritual practices will be protected under the law from harassment or persecution. But the militant insistence that “Islam will dominate” has to be discouraged and dismissed.

Mockery, as Murray says, has a part to play in this. We could do with a film about Islam comparable to The Life of Brian which would enter into the broader culture and enable people to laugh until they cry about the absurdities at the heart of Islam.

But we need also to press forward with both critical scholarship on the history of Islam and the active defence of cosmopolitan civil society against both reactionary rhetoric and threats of violence.

That way lies a possible future in which dignity and good humour will prevail over prejudice and intimidation.