We need to keep clearly in mind the distinctions between race and religion, religion and fanaticism. Islam is a religion. It has nothing to do with race. The problem we have is with fanatical Muslims on religious grounds. That problem has to be dealt with in those terms.

We need to keep clearly in mind the distinctions between race and religion, religion and fanaticism. Islam is a religion. It has nothing to do with race. The problem we have is with fanatical Muslims on religious grounds. That problem has to be dealt with in those terms. 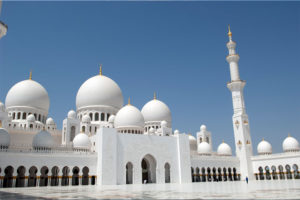 Making these distinctions did not save me from abuse by various regressive leftists who asserted — like the foreign editor of The Age, Maher Mughrabi — that the distinctions I had made were a lot of nonsense and that “of course” criticism of Islam is “racist”.

One lecturer in critical thinking at the University of Sydney, no less, denounced me on Twitter as a highbrow version of neo-nazi racists, a photo of whom accompanied his text.

Such deeply confused polemics throw into high relief how important it is to hammer these distinctions into our public and political consciousness so that they set the terms of the debate. For if we are to avoid serious social conflict over the challenge posed to Western secular society by aggressive Islam, it would be in everyone’s interest to understand that the issue is, indeed, one of religion and not one of race.

Religious concerns have underpinned tentative moves in the US and the EU to curtail massive spending by Saudi Arabia on building Wahhabi Islamist infrastructure in the West. Based on principles of toleration hammered out since the 17th century — notably in John Locke’s Letter Concerning Toleration of 1689 — all religions are allowed to worship unmolested. This is not so in Saudi Arabia. There, no religion other than Wahhabi Sunni Islam is permitted.

During the past few decades, the Saudi regime has spent a staggering $100 billion to build Wahhabi mosques, madrassas and other facilities around the world. They are used to propagate a religious culture that is singularly intolerant and reactionary.

Belatedly and cautiously, moves are afoot to curtail the influx of Saudi money to fund such activities. Note that the target here is the Wahhabi Sunni sect of Islam. It is not Arabs and least of all Arabs who do not subscribe to this particular religious sect.

As Daniel Pipes, of the Middle East Forum, pointed out recently, “The Saudis have been arrogantly indiscreet about spending to promote Wahhabism.” The extremist literature provided to the public by Saudi-funded institutions was described more than a decade ago, in a Freedom House report, as “a grave threat to non-Muslims and to the Muslim community itself”. Riyadh also has pumped money into the Council on American-Islamic Relations, “the most aggressive and effective Islamist organisation in the United States”.

This pattern of Saudi funding and the widespread disturbances being caused by Muslim fanatics directly raise the issues pondered by Locke more than 300 years ago when he sought to articulate what were to become, most notably in the US, broadbased principles of religious toleration: the relationship between the freedom to worship and the keeping of the civil peace.

“If solemn assemblies, observations of festivals, public worship be permitted to any one” religious sect, Locke wrote, meaning to Anglicans in England in the first instance, “all these things ought to be permitted to the Presbyterians, Independents, Anabaptists, Arminians, Quakers, and others, with the same liberty”. He was, in other words, seeking liberty for religious dissenters. He added, however, “if we may openly speak the truth, and as becomes one man to another, neither Pagan nor Mahometan, nor Jew, ought to be excluded from the civil rights of the commonwealth because of his religion.

“The Gospel commands no such thing,” he argued, “and the commonwealth, which embraces indifferently all men that are honest, peaceable, and industrious, requires it not”. He was inclined, however, to draw the line at the Catholic religion, which he saw as answerable to a foreign principality — the papacy — and especially given to inciting civil tumults and religious strife. That objection was overcome in time. It pertains, however, in our time, to various fanatical strands within Islam and must be dealt with.

The crux of the matter is that militant Islam poses a direct and deliberate threat to any secular liberal constitution. We must organise our defences and push back on a coherent and principled basis. When the regressive Left insists that no such defence is warranted and that any attempts to organise it are “racist”, it is not only being intellectually incoherent, it is setting up a situation in which the rise of Islam will inevitably be met by illiberal reactions. No one should want to see that happen.

Liberal democratic norms, properly understood, are not about treating any and every religion as self-contained and beyond criticism. They are about insisting that those who embrace religious beliefs, if they wish to be accepted within the liberal social order, must accept that their beliefs — often incomprehensible or rebarbative to others — are a private matter and must not be practised or propagated in such a way as to disturb the common peace.

Islam, as it is widely practised and propagated in our time, does not meet these criteria sufficiently to leave the adherents of other religions or no religion at all comfortable with how things are unfolding. Wahhabi Islam, Iranian Shia Islam, the Islam of numerous militant sects in Africa, the Middle East and Asia are incompatible with liberal norms.

These are not Arminians, Quakers or Presbyterians, or even Catholics. They seek violent theocratic revolution in the name of reactionary values. We do not owe them any favours or concessions. It is, on the contrary, they who must bow to the principles of toleration, or be excluded from its benefits.