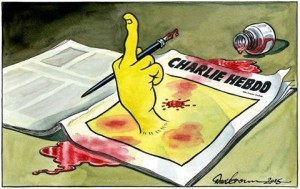 IN the face of the Charlie Hebdo murders, by religious fanatics, let us proclaim and defend the best of Western civilization's values:

We, the people of Australia, hereby affirm our common values. They are based not on a single culture or tradition but are founded in all of the cultures that make up modern Australia.

We affirm the worth, dignity and autonomy of every individual, and the right of everyone to the greatest possible freedom compatible with the rights of others. We support democracy and human rights, and aim at the fullest possible development of every human being.

We recognise our duty of care to all of humanity including future generations, and our dependence on and responsibility for the natural world.

We affirm the equality of men and women. All persons regardless of race, origin, religion or belief, language, gender, sexual orientation, or ability must have equal treatment before the law.

We affirm the right of everyone to adopt and follow a religion or belief of their choosing. But the beliefs of any group may not be used to limit the rights of others.

We hold that the state must remain neutral in matters of religion and belief, favouring none and discriminating against none.

We hold that personal liberty must be combined with social responsibility. We seek to create a fair society based on reason and compassion, in which every citizen is enabled to play their full part.

We uphold both tolerance and freedom of expression

We affirm the right of everyone to open and comprehensive education.

We reject intimidation, violence and incitement to violence in the furtherance of disputes, and hold that conflicts must be resolved through negotiation and by legal means.

We uphold freedom of inquiry in every sphere of human life, and the application of science in the service of human welfare. We seek to use science creatively, not destructively.

We uphold artistic freedom, value creativity and imagination, and recognise the transforming power of art. We affirm the importance of literature, music, and the visual and performing arts for personal development and fulfilment.

This statement was first published by the International Humanist and Ethical Union in March 2007 as the Brussels Declaration, with "Europe" instead of "Australia". But Australia shares with Europe a pluralist, multicultural democracy and a commitment to the best of Western civilization's values. And like Europe, we must avoid any movement towards the potential fascism of sectarian religiosity.

That's why Australia should fight to maintain and defend genuine secularism - ie, government neutrality with respect to religion.