Hugh Harris takes up the former Prime Minister’s latest intervention into the debate around religion and politics.

“People are too scared to speak”, claims ex-Prime Minister John Howard amidst a mood of growing resentment towards the Coalition’s Christian Right. Howard has called out a “minority fundamentalism” where progressives attempt to silence others. By example, he cites the branding of those who oppose gay marriage as homophobes, and the controversy over the Tasmanian anti-marriage equality booklet.

We see this phenomenon regularly – the pre-emptive bra 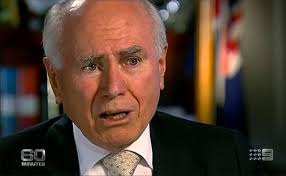 nding of an opponent’s view by some type of slur. But this applies to all sides of politics. Cory Bernardi heckled Bill Shorten calling him “a fraud”. Shorten responded in kind, dubbing him a “homophobe”. But then, a doe-eyed Bernardi complained that “it’s disappointing someone seeking to be PM resorts to name calling”.

Tut-tut – glass houses and all that.

But name calling is all too frequent. The media has a tendency to refer to the Greens as ‘loony’. Criticise Islam and you’re sure to hear the term ‘Islamophobe’.

The crucial problem is not the application of an epithet, but the lack of evidence. Given the sound-bite nature of media reporting, if there’s evidence offered, it sometimes doesn’t even make it into the story. And John Howard’s claims are similarly lacking in evidence. Who are these fundamentalists, pray tell? Fundamentalists believe in the literal truth of the Bible. To apply the term to others implies some sort of text to observe literally. It’s a misnomer to claim “progressives” have anything of the sort.

According to Howard, people are “cowed” against stating their traditional views for fear of losing votes or causing offence. But how well does this claim stack up? I wonder who, within the Coalition’s ranks, he has in mind?

Although now discredited, the Turnbull government legitimised these claims by agreeing to an enquiry.

So, in contrast to Howard’s claim, there’s clearly no fear of prosecuting arcane views in the party room.

Howard’s claim is a variant of the “aggressive, or sneering secularists” myth. Proponents such as Archbishop Anthony Fisher, Gerard Henderson and Paul Kelly, lament the changes in community sentiment which result in some extremely traditional views being branded as bigotry.

They do so regularly and without censorship. But it’s not traditional views per se – it’s when these views also devolve into denigrating minorities that accusations of bigotry ensue. No-one is being silenced.

Quite the opposite. The loudest voices are those shouting about traditional values. They also enjoy a vastly disproportionate influence on policy.

The Christian Right are a small minority of the Christian population in Australia. They’re also a vanishingly small percentage of the overall population of a secular Australia, which becomes more irreligious at each Census.

Yet they’ve inherited one of the biggest megaphones. The ACL is small and unrepresentative of Christians, yet it exercises inordinate influence. It is a relic of universal religiosity, and a nostalgia for pre-1970’s Australia – the fallacious golden age. And that megaphone boomed during the Howard years when they shored up the man-woman definition of marriage, and instigated the controversial National Chaplaincy program.

But I can think of one person who wouldn’t mind if the Coalition’s league of crazy-uncles would pipe down a bit. Malcolm Turnbull should make silencing them one of his top priorities.

The division they sow is first and foremost within their own party room. Not only do they present a fogeyish caricature of Christianity, they represent the antithesis of forward-thinking, innovative government.

Representing the shunned Tony Abbott model, this faction could not provide a greater contrast with Turnbull’s narrative. To exercise any authority over the old guard, Turnbull will need a mandate from electors. And yet his support erodes as his government’s inertia continues.

Howard referred to a “dangerous anti-religious” push. But this assertion shows a complete misunderstanding of the aims of secularists. Policies such as Religious Instruction and the National Chaplaincy Program overtly promote religion, by placing non-teaching staff, such as priests and ministers, in the classroom and school grounds.

Secularists don’t want or expect class time for external anti-religion evangelists to preach to students. What they want is a religion-neutral education system.

Comparative religious education, where various religious world views are taught by teachers, is often promoted as an alternative to the current Sunday school type classes.

The God fearing Christians within the Coalition would do well to remind themselves that belief in God is no longer the default setting for today’s youth. And that pluralism dictates tolerance for a diversity of belief systems, and a preference for State neutrality in religion.

The policy of promoting Christianity, as a foundational plank of our civilisation, ignores the fact that most Australians no longer practise it. It also invokes the classic conservative bias – the appeal to tradition: something is right because it has always been that way.

Most Australians have a cultural attachment with Christianity, and western values, whilst merely nine per cent are practising Christians. So for most Australians, acknowledging our history doesn’t compel us to observe Christian dogma, nor impose it on others.

So Howard’s claim people are too scared to speak is not only intrinsically self-defeating, but at odds with the evidence.

The recent Safe Schools controversy shows ideological myopia continuing to enjoy a prominent place in the national debate. But then, one man’s myopia is another’s golden-age vision of the future – or the past.

Listening to some, it’s hard to tell difference. But a rigorous exchange of views is alive and well in our country. If only it could be more evidence-based.