God save me from those who think I’m lost

The fight over religious instruction in state schools is not over whether there is a god but the right of parents and children to not believe, not participate and not to be made outcasts.

Source: God save me from those who think I’m lost

Despite constitutional efforts to protect one’s freedom from religion, God and religion continues to be imposed on Australians who do not wish to receive Him. 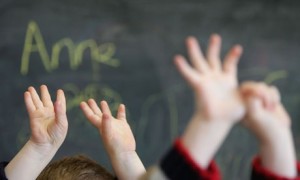 The last time I was instructed to observe God was at my state primary school in the early 1970s when all students were required to sing God Save the Queen at the beginning of assembly. And although God disappeared from school assemblies when Advance Australia Fair became our official national anthem in 1984, His presence persists to this day in certain state primary schools.

I, for instance, was surprised to discover that my nephew’s state school instructs its students to recite the school pledge, which begins with the words “I love God” at the beginning of every assembly.

When a parent raised her concern with the school’s principal, she was dismissed as “being petty”. Adding: “We are, after all, a Christian society.”

A curt reply, a dismissive wave of the hand or a scoff at suggested secular alternatives is the sort of response typically associated with a religious leader assuming moral superiority, not a state school educator responsible for engendering free, independent and critical thought in all students. It is the kind of righteous arrogance that was on full display at the Access Ministries meeting I attended two weeks ago. The peak provider of religious instruction and school-based chaplaincy in state schools convened the meeting in response to the new ministerial directive on how special religious instruction (SRI) is to be delivered in state primary schools.

The key changes relate to the switch from an “opt-out” to an “opt-in” arrangement, which requires parents to positively consent to their child receiving SRI. Principals can decide to cancel SRI based on low opt-in numbers or if they believe the programs go against the values of the school.

The changes have clearly unsettled Access Ministries, prompting the general manager of Christian Education and Training, Linda White to implore the audience to: “Embrace the opportunity we still have … to enhance our relevance.” And she added: “We live in a religious world.”

Supporters were also urged to pray for “Principals … that they would not daunted or dismayed by the challenges of the new Ministerial Direction”.

It is no wonder that Fairness in Religion in Schools – a parent-run, grassroots  group which has brought the teaching of religion in schools to public attention – has been approached by parents voicing their concerns about tactics used by certain state schools to get parents to sign the the opt in form.

According to FIRIS campaign co-ordinator Lara Wood, one school presented parents with the new opt-in SRI consent forms during parent/teacher interviews and asked them to sign the form then and there. Parents were not allowed to take the forms home to read and consult with their spouse or partner.

In anther case, non-SRI students were corralled in a classroom for “quiet time”, while the religious program, which included singing and clapping to religious songs, proceeded within earshot in the adjoining room.

Australians are free to worship. They are free to take an oath, attend places of worship, enrol their child in Sunday school, allow them to participate in a nativity scene, and opt their child into Special Religious Instruction.

Australians are also free to reject religion. And this is what religious organisations such as Access Ministries don’t get. They do not see their coercive tactics as an attack on personal choice. They do not see their attempts to evangelise children as an attack on one’s right to freedom from religion. And they do not see how their mission to make every child a disciple as proselytising. They only see those who choose not to share their narrow moral view of the world as lost.