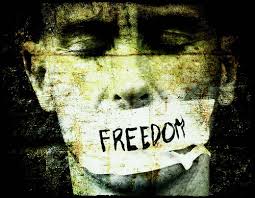 THE trouble with freedom of expression is that it applies to our enemies as well as our friends. We have to grant it to those we despise as well as those we admire. It applies equally to the most despicable expressions of the human psyche and to the loftiest and most elevated.

[The following article was first published in the Australian Rationalist, no 72, Summer 2006]

The price one pays for living in a free and demo­cratic society is that one is sometimes confronted with words and images that one does not like or, worse, finds abhorrent. I personally find the images of a suf­fering man nailed to a cross displayed by Christian churches to be horrific and obscene. But my taking offence at them is not a reason to have them removed. Likewise, a Muslim, for perhaps less coherent reasons, may not like to see images of the Prophet Muhammad. However in a free society such images are bound to crop up from time to time and the Muslim will just have to grin and bear it.[quote align=”center” color=”#999999″]The fact that the principle of free speech gives us the right to do something does not mean that we ought to do it at every available opportunity. In many circumstances, it would simply be bad manners. If we are going to deliberately offend someone, we need a good reason, not just a right, to do so.[/quote]

Of course in a civil society, which respects diverse beliefs, it would be rude and provocative to delib­erately thrust statues of a man nailed to a cross in my face, or to continually confront a devout Muslim with images of Muhammad. The fact that the principle of free speech gives us the right to do something does not mean that we ought to do it at every available opportunity. In many circumstances, it would simply be bad manners. If we are going to deliberately offend someone, we need a good reason, not just a right, to do so.

In addition, while freedom of expression is a cor­nerstone of liberal democracy, it is not an absolute. We can’t say anything we want to say any time we want to say it. Even in a liberal, democratic, multicultural society there are limits to our freedom to speak or write. But because there are illiberal, unde­mocratic, mono-cultural forces operating in any society that will attempt to use such limitations as a launching pad for extending the curbs of free speech beyond what is acceptable, we need to treat all attempts to restrict freedom of expression with great scepticism. Free speech must be taken as the norm, and the onus must be on those who wish to introduce restrictions to justify such proposed restrictions in liberal, democratic terms on a case-by­ case basis.

What are the limitations that a liberal, democratic, multicultural society will place on free speech? As we have indicated, politeness and respect for others may impose some constraints, but certainly no blanket restrictions. And there are other considerations that may limit the unfettered exercise of freedom of expression.

One set of limitations concerns intellectual prop­erty rights. We ought not and cannot take someone else’s creation and either claim it as our own or profit from it in the marketplace. This ‘copyright’ should extend for the lifetime of the author. Whether it should extend after the death of the author is a more debatable point. There is an argument that it should continue for a short time after the author’s death so that his or her dependants may continue to benefit from it. When the English copyright laws were first framed, life expectancy was low and fifty years after death was considered a fair time for which to extend copyright protection. Now that life expectancy is con­siderably higher and people are living into their sev­enties and eighties, we can safely assume that in most cases an author’s dependants will be well and truly adults and no longer dependent when the author dies. Therefore we should be looking to reduce the time that copyright protection lasts for after the author’s death: perhaps twenty or twenty-five years would be a reasonable duration. However what we have seen instead is an unjustified and unjustifiable increase of copyright protection to seventy years after death, under the terms of the disastrous Free Trade Agreement with the US. The supporters of liberal, democratic principles were not strong enough to prevent this change being forced on us by the illiberal, undemocratic, commercial forces that promoted it.

Another limitation on freedom of speech is the restriction on publishing lies about people. However there are two aspects to this: the private and the public. My own view is that our private lives should be just that, and that no one has the right to publish descrip­tions or pictures of it in any way, whether the facts are true or not, and whether the subjects are famous or not. That fact that a person enters public life, whether as a businessperson or a politician or an actor in a soap opera, should not ipso facto open up their private life to the prurient inspection of all and sundry. It is only when one’s private actions impinge on the public arena, for example if you are using business funds to pay prostitutes or sleeping with the producer in order to get cast in better parts, that these actions become open for public scrutiny. Public actions, on the other hand – actions taken in the pursuit of polit­ical, social, cultural or economic ends, which by def­inition take place in the public arena and affect other members of the community – need to be under con­stant scrutiny, and people need to be able to say what they think is happening without fear of a defamation suit, even if they can’t prove it in strict legal terms. If there is a genuine public interest in knowing a piece of information, the test should be not whether an alle­gation is true or not, but whether someone had rea­sonable grounds for believing it to be true. Defamation suits have too frequently been used to squash debate on important issues of public interest (see the Australian Rationalist, no. 57, Autumn 2001 for a plethora of examples) and have acted as successful curbs on crit­icism and dissent because the onus is on the defen­dant to prove their statements in strict legal terms, which may not be practically possible.

Third, in a civil society it is important in some cir­cumstances to be able to tell people things in confi­dence. For this reason, the freedom of certain members of society – lawyers, priests, doctors, psy­chologists etc – to speak out may be limited by principles of confidentiality. In practice, this issue usually comes up in the negative: the authorities want to find out what these people know about someone, and these people claim the privilege of confidentiality to avoid having to reveal it. The concept of ‘Com­mercial in Confidence’ has been broadly used to stop inquiring minds digging away for the truth. The extent to which such confidentiality principles apply in matters of public interest is arguable. For example, the public often has a genuine interest in the outcome of a law case, and in such instances it may be that ‘confidential settlements’ should be illegal. However, arguing this case is beyond the scope of this  discussion.

We next come to a group of restrictions on freedom of speech that is more problematic and less clear-cut – that is, restrictions on statements that might incite breaches of the peace or criminal acts that are not in the ‘national interest’. It is a fact of politi­cal history that the struggles to achieve many of the most important advances in the growth of democ­racy, and of free speech itself, have involved breaches of the peace and acts that, according to the govern­ment of the day, were criminal and against their view of what constituted the ‘national interest’. So attempts to limit freedom of speech on such grounds need to be treated with caution. They may simply equate to entrenched political groups trying to shore up their position.

The same is true of obscenity and blasphemy: one person’s obscenity is another person’s erotica; one person’s blasphemy is another person’s legitimate satire on religion. In a multicultural, democratic society, why should religion and religious beliefs be especially priv­ileged and protected from criticism? Believers just have to be tolerant and accepting like the rest of us, and put up with things they are not happy about in the interests of freedom of speech, a greater good. As George Orwell remarked, free speech involves being able to tell people things they don’t want to hear: it involves accepting as utterable what you find diffi­cult to deal with, licensing the lowest common denominator and permitting the pernicious, all in the knowledge that a greater good is being served. Without freedom of speech, a liberal, democratic, multicultural society is doomed.

Which brings us to the furor over the depic­tion of Muhammad in cartoons in Denmark. The pro­hibition on visual representations of the Prophet does not come from the Qur’an. Many religions use visual imagery extensively to reinforce their message: witness the use of icons in the Eastern Orthodox Church and the magnificent tradition of religious art in Western Europe. But the worshipping of ‘graven images’ is specifically  forbidden in the Jewish Ten Commandments, and some Christian sects subse­quently adopted this prohibition. By a twist of fate, one of the early conquests of Islam was such a group and, Islam being a religion that borrowed heavily from its immediate environment, the Muslim tradi­tion then developed so that pictures of Muhammad were not allowed. This was not a universally accepted tradition, and there are more than a few examples in Islamic art of such portraits, however most Muslims today do follow the tradition. Still, this does not mean that non-Muslims should be bound by this prohibition. This would be like saying that nobody anywhere in the world should eat red meat on Friday because it is a Roman Catholic tradition not to do so.

What happened in Denmark was that there was a perception that Muslims were trying to impose de facto censorship on non-Muslims by intimidating them into accepting the traditional Muslim ban. Artists were too frightened of retaliation to make rep­resentations of the Prophet for legitimate purposes, such as illustrating a book about Muhammad’s life. So in publishing the cartoons, the Danish paper was making a stand for freedom of speech. Unfortunately, two things happened. In the first place, the cartoons were not very good, and at least one of them was provocatively  offensive. However Muslim offence could have been contained if the moderate Muslim clerics had been able to meet with authorities to voice their concern. The second unfortunate thing was that the authorities refused to meet with these clerics, and the Muslims felt that they were not being taken seri­ously. The issue was then taken out of the hands of the moderates and hijacked by radical Muslim clerics, who toured the Middle East stirring up trouble, using dishonest tactics such as including pictures of Muhammad as a pig, which were not part of the origi­nal Danish cartoons, in the dossier of alleged offen­sive cartoons. More tolerance on both sides could have avoided  this situation.

All of which set me to thinking: was it possible to draw a cartoon which was genuinely amusing and which satirised the situation without actually offend­ing Muslims by depicting Muhammad? Here is my modest attempt.