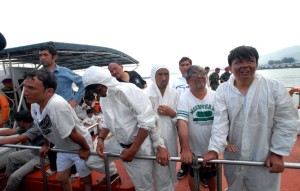 epa03376546 Asylum-seeker survivors stand on a rescue boat as it arrives at Merak seaport, Banten Province, Indonesia, 31 August 2012. Fifty-five people were rescued after a boat carrying an estimated 150 migrants en route to Australia sank off Indonesia's Java island. the survivors were taken to Merak, a port on the western tip of Java, where they were to be handed over to immigration authorities, said Gagah Prakoso, National Search and Rescue Agency spokesman. EPA/TUBAGUS